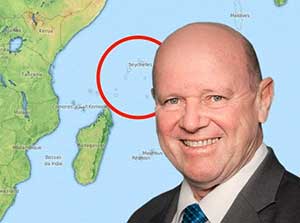 Seychelles remains the idyllic mid-ocean group of islands blessed to be a year round tourism destination.

The Tourism Industry of Seychelles then recorded the appointment of Alain St.Ange as the Minister who impacted the growth of the industry to new heights.

Alain St.Ange was the former Tourism Minister of the Seychelles who aspired to fly the Seychelles Flag at the United Nations World Tourism Organisation (UNWTO) if the island’s bid for the position of Secretary General had not been abruptly withdrawn.

Alain St Ange has been working in the tourism business all his working life and in Government services since 2009. He was appointed as the Director of Marketing for Seychelles by the island’s President. After one year of service, he was promoted to the position of CEO of the Seychelles Tourism Board before being appointed Minister of Tourism & Culture by President James Michel in 2012. He was one of two Ministers appointed outside party affiliation of the ruling party to help redress the island’s economy.

Tourism was and remains St.Ange’s life and passion and he steered that industry with style, passion and utmost devotion. In 2016 Alain St.Ange was re-appointed by President Danny Faure as Minister of Tourism. Civil Aviation, Ports & Marine. He continues to be a sought after speaker on the International Circuit and is admired for his ability to deliver ‘off the cuff’ speeches.

Alain St.Ange is a Tourism Consultant heading the “Saint Ange Consultancy” and is responsible for the widely distributed weekly “Saint Ange Tourism Report”.