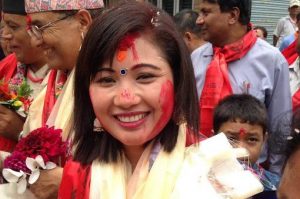 Kathmandu (Nepal) – March 11, 2020 (travelindex.com) – International Women’s Day, a daring Everest summiteer woman now resolves to fight against child marriage.Climbing the highest peak of the world, Mount Everest, is a daring task. Very few however brave the adventurous journey, reach atop the Everest. Together, the tribulation of climbing for many is a strong caveat to quit ambition.

There are snow and ice everywhere, on the trail, steps, cliff. A serene and sublime indeed.

A lady with firm determination, Kalpana Maharjan from Lalitpur district, walked the steps up the base camp. She was both bewitched and anxious.

She continued battling odd and finally reached the summit. Despite having experience from the south face of the peak, her climb next time was from Tibet’s side was new warranting further adventure. As she reached 8300 meters, the oxygen, life support, finished. To continue or not- she was dogged with a quandary.

The severe cold turned her lips dry. Nothing but the snow everywhere. She was not able to reach the tent where there was oxygen. Even the assistant left for oxygen failed to return. It can be the last moment of life, Kalapana surmised, mulled.

The decision to climb Everest is itself keeping life in fifty-fifty. She was told by the instructors, before reaching the final stage of life, taking a photo, video can be an important record of the event, which can at least serve bliss to the life before departing.

“As I felt I neared death, I took a selfie. It is solid evidence of my throes,” shared Maharjan while giving an account of her second climb to the Everest. “Oxygen finished; Sherpas have gone for oxygen. If they bring, I survive, otherwise die in now,” she spoke for recording.

Sherpas, assistant to climbers are always the life saviors- they fetched oxygen in 45 minutes and began Maharjan’s second life. This account is also coming in the book, according to her. Every climber has to climb lesser peaks and be well-trained before attempting Mt Everest.

In this connection, at one time Maharjan had been climbing the Mera peak (6,000 meters) in Solukhumbu. She fell unconscious due to altitude sickness when she had reached 5,300 meters on the peak. She was in a coma for seven days. “Everyone had given up hope. But by god’s grace, I regained consciousness,” said Kalpana, who believes that her life is a life of profit.

Now, Kalpana has started working for materializing the resolve that she made on the highest spot on Earth, the summit of Mt Everest, to start the ‘Campaign to Prevent Child Marriage employing Education’. “I had reached the ‘death zone’ but I returned to life. This is my third life and I want to dedicate my life of gain to the society,” she said of her plan.

Kalpana, who worked as a tourism journalist before this, ascended the world’s highest peak from both the Nepal and Tibet side in 2018 and 2019 respectively. She is the first Nepali woman journalist to climb Mt Everest from both sides and is in the process of enlisting her name in the Guinness Book of World Record’. By fluke, she climbed Mt Everest on the same date (both according to the Nepali calendar and the Gregorian calendar) in 2018 and 2019.

It was the 23rd of May and 9th of Jeth 2075 Bs and 2076 BS. She has the same extent of excitement and happiness now while initiating the campaign to stop child marriage, the level of happiness and excitement she had at the time of reaching the top the world. She is also committed to this campaign out of her sense of responsibility to do something positive for society.

As such, she is equally determined not to give a chance for the resolve that she made atop the Everest to falter. The campaign is now at its initial stage and there is a lot more to do. “There is the growing problem of child marriage in society. These days, child marriage is still in practice by increasing the age of the actual age that is mentioned in the birth certificate.

Because child marriage is illegal in Nepal, the dogmatic of parents take their under-age children across the border to India to dodge the law. “Most of the child marriage is found practiced by the poor and illiterate families. This evil practice would not end merely by stopping few such marriages at the time of their taking place and reprimanding the families abetting it,” said Kalpana, reiterating that this practice could be eradicated only through education.

Guided by this mantra that the practice of child marriage should be also fought from the education front, she has started a new chapter in the ‘Peace Education Campaign’, together with Rabindra Maharjan of the Campaign. Both Kalpana and Rabindra believe that if a person is educated that person can resist the undue pressures coming from others and so can take decisions independently.

Therefore, for them, the main priority is education and it would be possible if the campaign is run by engaging the teachers themselves. First, the teachers should be educated and trained for the children to get a quality education. The positive change should begin with the teachers. “Stick, duster, and chalk are not the teachers’ tools, rather learning by playing is.

Practical education is the real knowledge,” Campaign chair, Rabindra said. The campaign initiated by Bhanudaya Kalpana has started to fulfill her resolve under the campaign from Bhanudaya Basic School at Mahankal of Lalitpur district.

Sagendra Shrestha, a trained school administrator, has been mobilized. Initially, 15 children had joined the campaign. Now there are 180 children. Shrestha claims that the credibility of the school which is in the process of being merged with another school has been saved by this campaign alone. He said he has played a role in ushering in a change in the school from the bottom through a private-public partnership.

“We have started working on a trial basis in this school. Based on the outcome of this, we plan to run this program in 126 other schools where children from poor and disadvantaged communities study. It is possible, we can and we will do it,” said a confident Kalpana.

She has begun the campaign from her alma mater and she sees the need for many helping hands to make this noble campaign successful. Summit Air contributes Rs 5 per passenger for the sustainability of the program. The Shanti Sikhsha Abhiyan (Campaign) has launched the program at school in cooperation with the Collaborative School Network.

During occasional motivational programs, she shares about her Mt Everest climbing experiences. The funds collected from such motivational events and tips she receives as a tourist guide issued in the implementation of the program. She sees rote learning as a major problem in the existing educational system which according to her is not expected to bring significant changes in the society.

As education is a means of bringing societal changes, it should be capable of ensuring positive changes. They plan to incorporate teachers along with women having experiences of child marriage in the campaign. “Teachers’ role is significant in the building of a better society.” The campaign bounds teachers within its ethnics. Records of teachers’ attendance, presence of children, examination system and meetings procedures are kept regularly in writing and reviews are made among the group to find out the status of overall school management, issues to be improved, good aspects and so on.

Signs of improvement have started been seen. The experience of school principal Bahadur Maharjan is that the school is on the verge of witnessing a significant change in the aftermath of the program implementation. The school which was about to be closed at one juncture in its history now serves as a learning center for students from class nursery to six.

Shanti Siksha Abhiyan Nepal has been active for around a decade. It began with a joint initiation of seven students of Budhanilkantha School, which aims to bridge a learning gap between the private and government schools. The group led by Rabindra had, with the help of donors, established a primary school at Rameche of Sindhupalchowk.

The school was established at the cost of Rs 4.3 million and one foreign national had donated US dollar 150 as seed money for the school establishment. Under the campaign, over 250 people were trained for school education. It mobilizes domestic and foreign volunteer teachers. The organization has so far assisted over 14 schools for the furnishing.

Childhood development training is in its schedule. Before the 2015 April earthquake, it had built 18 school buildings and after the quake, it had contributed to the rebuild of 24 schools.