Seamlessly blending Portuguese and Chinese culture, Macao is a city of unique charm, exemplified by the UNESCO World Heritage site status of its historic centre. Macau’s heritage preservation forms an integral part of its branding and identity. Dramatically contrasting with the centre’s old-world charm are the city’s world-class hotels and resorts, expansive tourism and entertainment facilities, luxurious shopping malls and state-of-the-art convention and exhibition venues. Within a short distance, you can easily find Chinese temples and Western churches in the same neighbourhood.

Dedicated to the goddess of fishermen, Matsu, A-Ma Temple was built in 1488, and is one of the oldest and most famous Taoist temples in Macau. The A-Ma Temple existed long before the city of Macau came into being. It consists of the Gate Pavilion, the Memorial Arch, the Prayer Hall, the Hall of Benevolence, the Hall of Guanyin, and Zhengjiao Chanlin (a Buddhist pavilion). The variety of pavilions here that are dedicated to the worship of different deities within a unified complex make A-Ma Temple an exemplary representation of the true diversity of Chinese culture, inspired by Confucianism, Taoism, Buddhism and multiple folk beliefs. It is one of the UNESCO World Heritage sites not to be missed.

Fortaleza do Monte (Portuguese for Mount Fortress) is the historical military centre of Macau. It was initiated by the Jesuits in 1617, and completed in 1626. It occupies an area of around 8,000 square metres, with 32 cannons placed around the fort, and watchtowers adorning the two corners of the southeast wall. Mount Fortress was once Macau’s principal military defence structure. The fortress was equipped with cannons, military barracks, wells and an arsenal that held sufficient ammunition and supplies to endure a siege lasting up to two years. The fortress covers an area of 10,000 square metres and is in the shape of a trapezoid. The four corners of the fortress protrude to form bulwarks. You can enjoy a panoramic view of Macau when visiting here. 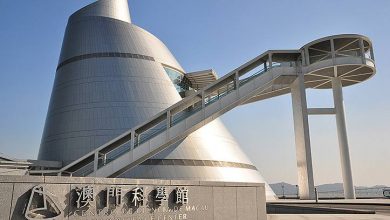