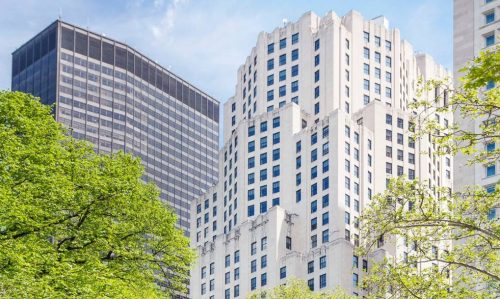 The new headquarters, expected to open mid-2022, will be a shared space with Suntory America. Beam Suntory and Suntory America are both subsidiaries of Suntory Holdings, a global leader in alcohol and non-alcohol beverages, based in Japan. Eight Inc. has been asked to create a state-of-the-art center for collective and individual working— a “soul space” more than a workspace.

Beam Suntory selected Eight Inc. following a competitive RFP process. The company expects Eight Inc.’s human-centric design process and seamless integration of digital technology will result in a workplace where employees can thrive while doing their best work. Eight Inc. was founded in San Francisco, and has five offices across Asia, with a further six across North America, Europe and the Middle East.

“As the world returns to the office, there is an opportunity to rethink our workplaces, to meet people’s needs more fully and shape a better future.” said Roy Kim, Principal at Eight Inc. “We’re excited to be partnering with Beam Suntory and Suntory Holdings on what is one of the most significant and ambitious workplace projects since the pandemic changed the ways we work.”

“Beam Suntory’s growth ambitions are centered around premiumizing our brands, and there’s no better place to do that than in New York City, which is the epicenter of luxury,” said Jessica Spence, President of Brands, Beam Suntory. “We are thrilled to partner with Eight Inc. to create a space that will inspire our people, attract top talent, and showcase everything that our incredible company and our iconic brands can be. And we are honored to go through this process with Suntory Holdings, to create a space where Suntory leaders and other group company representatives can come to collaborate and truly realize the vision of One Suntory.”

The new HQ will be located at 11 Madison Avenue, a masterpiece of Art Deco design and home to renowned restaurant, Eleven Madison Park. It will provide around 100,000 square feet of office space and is scheduled for completion in mid-2022.

Beam Suntory is the spirits arm of Suntory Holdings Limited of Japan. It was created in 2014, with the acquisition of Beam Inc., the world leader in bourbon, by Suntory Holdings. Its spirit brands include Jim Beam and Maker’s Mark bourbons, as well as Japanese whiskeys Yamazaki, Hibiki and Hakushu.

Beam Suntory was created in 2014 by combining the world leader in bourbon and the pioneer in Japanese whisky to form a new company with a deep heritage, passion for quality, innovative spirit and vision of Growing for Good. Headquartered in Chicago, Illinois, Beam Suntory is a subsidiary of Suntory Holdings Limited of Japan.

WTTC, 174m Travel and Tourism Jobs Could be Lost Due to COVID-19